Nothing is quiet as iconic to the Roaring Twenties and Dirty Thirties as a speakeasy.  These were places were people went to drink, dance, smoke and enjoy themselves.  Movies often depicts the classier clip joints as places filled with live bands, cigarette girls and the hedonistic Flapper. 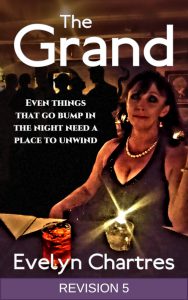 The cover for the Grand was designed to be temporary.  Sites like Wattpad demanded a cover even if the work was in progress, so I found shots from the era and used them as a cover.  While the cover served admirably, I never owned the rights to the image. Sure it should have been out of copyright,  but such laws are always a bit ambiguous.

Recently I had the opportunity to visit a Speakeasy in Halifax and I took a few shots.  Turns out that one seemed to have some of the elements desired.

To make the cover work I did the following changes:

Overall it makes for a cover which is uniquely mine.  While I will likely experiment with other cover designs in the future, this one will at least set my fifth revision apart from the others!