When Revision 5 was introduced, it brought about a new cover design, which  featured a speakeasy.  The speakeasy was iconic for the Roaring Twenties and Dirty Thirties, at least in the United Stated and seemed to be a good fit. 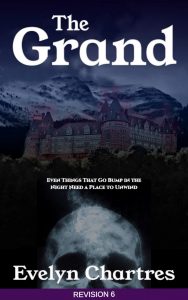 A reader proposed that I use an actual hotel to create the cover.  This idea has merit since the Grand features separate stories that have a common era, theme and location. The Grand is the focal points for all the stories, so it makes sense to pursue that idea.

Fortunately, I had the chance to visit la Ville de Québec which features one of the Railway Grand hotels found through Canada. I used Chateau Frontenac as a base, threw in a backdrop of the Rockies and added a skull rendition that I got from pixabay.com.  The latter was listed is Public Domain, whereas the former where both my shots.

The font itself is YoungSerif found on the fontlibrary.org.  It seems to complement the overall feel of the cover and has an agreeable copyright.

Overall, I think I may have found my eventual release cover.  What do you think?