G.M. Nair has blessed us with Duckett and Dyer: The One-Hundred Percent Solution, the second in a series that features Michael Duckett and Stephanie Dyer, two private investigators who have a habit of finding trouble, no matter where they go.

This story takes off a few months after the events of the last book end. After the pair’s last hijinx-filled adventure, there were hints that something else was at play. The author does not disappoint by launching our heroes right back into the thick of things.

Nair also brings back several memorable characters, providing us with a mixture of salty and sweet. We are even regaled with a bit of backstory, interwoven with the main storyline, which hints that not all is well in the multiverse.

This story has much of the same flavour as its predecessor. The humour prevails and promises a few zigs where the reader would expect a zag. This is truly where G.M. Nair‘s imagination shines.

If you want a solid read that ventures into the realm of the random and absurd, then this novel is for you!

Last month, I was interviewed by Sarah Walker of Hidden Gems, a talk-show for avid readers and aspiring authors.

This interview can be found here, and features The Van Helsing Paradox, along with five questions that required a lot of thought to answer! I highly recommend that you check it out!

Hopefully Sarah’s YouTube channel will pick up as she interviews more authors!

Last month, I was interviewed by Tiffany Lewis of Rebellion LIT, a site dedicated to authors who create content on their own term with no regards to non-creative barriers.

The interview can be found here, and there are ten questions varying from how I got stated, to what is my favorite recipe! Highly recommend that you check it out!

Yay! I got my copy of Resurrection: The Legend of Sanction by Kayne Sampson in the mail. Thank you! This is going way up on my to-be-read list. 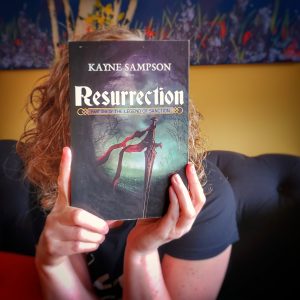 Angels, demons, a war, and the struggle for balance. What’s not to like?

Are you curious? Get it now!

I was fortunate to have The Taliesin Affair: Maliha Anderson’s First Case by Steve Turnbull to keep me company on my long flight back home! This author brings about an interesting take on Stream Punk, mainly that while technology in a post-Victorian era may have advanced by leaps, society has not.

In the shadows of the Great War, a clever young Indian girl named Maliha discovers a body in the library of a prestigious boarding school. How does a mixed-raced navigates through a world populated by royalty, the privileged, and wealthy? Is she up for the task? Read more to find out!

I loved this interchange of the fantastic mixed with the cold reality of the era. This book is highly recommended. While it stands alone, it does make for a great stepping stone for more works in the series!