~Giggles~ I’m not sure how Clara would like pulling the jolly old fat man around. Although, he might need a body guard these days…

Tis the season! Why not grab a dark fantasy free book to unwind?

Thank you Adam Wing for this cover!

It is my pleasure to introduce The Van Helsing Incursion, the third installment of the Clara Grey Adventures, a Dark Fantasy series about a hunter who hunts things that go bump in the night! This is my fourth release in as many years, and while part of a series, I consider this book to stand on its own.

After a lifetime of hunting creatures that haunt our dreams, a flapper, turned fallen angel, gives a budding relationship the chance to grow. Should be a snap? Think again!

During the Roaring Twenties, Clara Grey hunted things that went bump in the night. On her final mission, she paid the ultimate price to rid the world of a powerful foe. As a reward, she ascended to Heaven and joined its ranks as an angel.

Hunting things that go bump in the night is child’s play when compared to juggling relationships.

Ninety years after her death, Clara fell to Earth intent on saving a soul. While her mission was a success, an act of self-defence barred her from returning to Heaven. Lost in the modern world, Clara was forced to seek out unlikely allies to navigate through those uncertain times.

Four months later, Clara has settled in with Elizabeth, a young woman she saved shortly after descending to Earth. For a gal who had sworn off anything that hinted at normalcy, she learns that being average is not as easy as it seems.

Alas, repercussions from choices made on that fateful mission have not been idle. Her enemies trigger a chain of events that will force our fated femme fatale to act. Is Clara prepared to deal with the fallout? Will her allies come to her aid? Or must she stand on her own?

Before reading on, be sure to consider: Hunting things that go bump in the night is child’s play when compared to juggling relationships.

The Van Helsing Incursion is also available in print on Amazon.com.

Special delivery! I just got my manuscript for The Van Helsing Incursion back from the editor in the mail. So guess what I’ll be doing this weekend? That’s right, doing some editing! 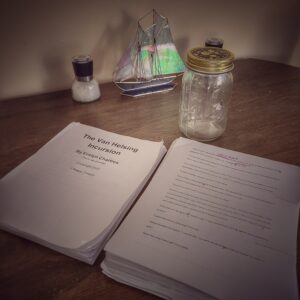 She had fond memories of her leaping between rocks to get on the island, while wearing a cute dress, and a pair of rubber boots. This was her kingdom, a refuge from reality that it was time to grow up. It was sobering that she could cross the pond in one step now. 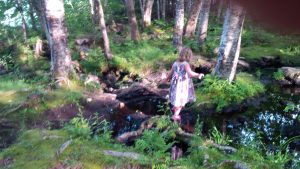