Yet Another End of a Cycle – Evelyn Chartres 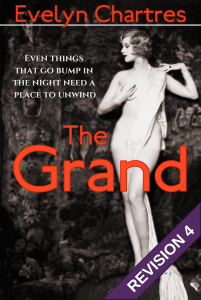 I have completed my fourth review of the Grand. This review marked a 46% drop in overall corrections when compared to the previous revision. Hadrian’s Legacy had the most substantial drop at 71%. Ethereal Nights stood at the opposite end of the spectrum with a 1% increase in changes.

Overall there were 1,288 corrections done over the whole of the Grand giving us an average of 72 changes per chapter. This review differs  from the others, because the last three chapters saw little to no improvement in generated changes.

Here is a summary of the above:

While the decrease in change numbers has not been consistent, I do not view this as a bad thing. When reviewing the Portrait I found a similar behaviour, which may be related to my mood or a change in perspective.  Either way, this means there are at least two revisions left for The Grand.