Life Through a Stereoscope 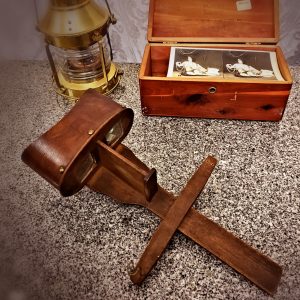 I just received this quirky little anachronism that I found through Etsy. Featured in the image is a streoscope, a contraption that allows the viewer to see images in three dimensions.

I’ve seen these items in museums throughout the years, and found them to be fascinating. What did people do before television, the radio and the internet? Well some looked at foreign scenes and women in their three-dimensional glory. All with the help of a bulky viewer.

In the Van Helsing Paradox, Clara has referenced these devices when describing what she saw. In that situation, the world was frozen in time, depth remained, but the world looked like an aged photograph. In many ways, it was satisfying to see the world through the streoscope, and see just how close that description worked when it came to this piece of history!

Yes this device works perfectly, impressive for something that was patented in 1895.