The Van Helsing Impetus – Excerpt No. 134

Homo Mortuum had been mentioned throughout this tome. Unlike ghosts, which were explicitly denied by staff, there was no mention at all of these creatures. The only noted details were an eerie green glow, and a taste for flesh.

A hundred paces ahead there was hunched over a well-dressed man. By the looks of the expensive threads, fangs and obsidian claws, she assumed it had been one of them.

What best could be described as a zombie, was naked, and shaved bare. That gave her insight on its wounds. There was bone protruding through its right calf, gashes over much of its back, and the abdomen was splayed open. Even now, intestines and its heart were swaying from the hunched over creature. 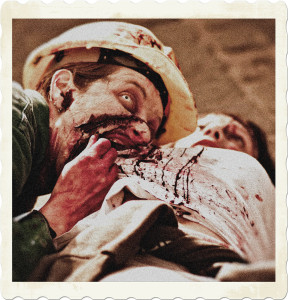