Victoria opened her eyes and saw the perfectly flat surface of the marble floor. Every part of her body ached and even her hair hurt. She struggled to come to terms with the mechanics of that concept. 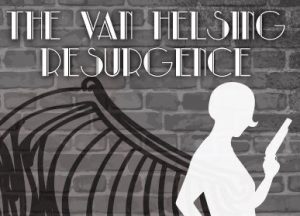 Despite being in pain, she managed to peel herself from the floor. In that moment, every single muscle in her body screamed out in agony. Funny that when faced with a great deal of pain, concerns over her hair no longer mattered.

“Where am I?” Victoria asked.

Memories of her recent escape bled back into her conscious mind. With that came the realisation that she was still at the chapel of horrors.

With a bit more effort, Victoria managed to gain a solid footing. Her feet were unsure of themselves, which left her wobbling, but she persisted until her balance steadied.

The first few steps were daunting, nonetheless she grew more confident. It was enough to grant her some freedom of movement, and look for an exit.

Despite the atrocities depicted in the stained glass works commemorating sin and murder in frightening detail, this place was quite beautifully designed: marble walls, supported by Corinthian columns, all adorned with gold. This chapel had a decidedly Art Deco style, one that seemed more authentic than current facsimiles.

Her eyes ran over every visible surface, and yet, she was no further ahead in finding an exit. Once she shifted her footing, her eyes caught a glimpse of a landmark behind one of the columns. Victoria strained her neck to spot golden doors, and approached carefully. It seemed appropriate to assume there were traps.

“Come on Vicky,” Victoria said to calm herself. “Don’t let your imagination get the better of you.”

There was a golden button located at the side of the door and she gasped when she got a better view. The door was meticulously engraved in solid gold; a relief depicting a scene from Dante’s Inferno gleamed in the artificial light.

She pressed the button, half-expecting a trap door to drop out from beneath her. Instead, a pleasant chime rang throughout the chapel, as the doors parted.

Without hesitation, she stepped inside, then searched for a control panel only to find there was none. Either this elevator was programmed based on the identity of the passenger, or there was only one stop.

“Only one way to—,” Victoria said.

Her knees nearly gave out when it began its high speed ascent. In a panic, Victoria grabbed onto a golden rail with enough strength, that her knuckles were white.

There were no dials nor displays visible in the elevator car. It appeared that she was just expected to enjoy the ride. In her current state, this experience was anything but pleasant leaving her to wonder how long this moment would last. The answer came when the elevator came to a complete stop. Once the doors opened, Victoria was faced with a change of scenery.

Had Victoria’s mind not been on the verge of exhaustion, she would have been enraptured by the beauty of it all. She knew of the existence of abandoned subway stations underneath the city, those left behind when new lines came into service or once stations no longer served a purpose.

Never in her life did she expect to be standing in one, let alone one so beautifully maintained. Every tile was in place and the grout was an immaculate white, a miracle since the floor tiles had to see some foot traffic from time to time.

As Victoria stepped away, the elevator’s doors slid shut. Dead ahead, there was a subway car of modern design, which lit up when she approached. Just her luck, the doors were open.

Now she was curious because this all seemed to be far too convenient. Victoria walked up to the platform’s edge, looked down the line at both ends, and saw nothing suspicious. The steel tracks shone in the station’s light and from the looks of this car, this was operational line, although clarity on serviceability of the line at its destination and where that happened to be was a different matter.

She turned around to look for clues. Victoria remembered that most stations had a map to direct visitors. Then again, elevators also had panels to indicate what the elevator was up to.

“This is getting tedious,” Victoria said with an exasperated sigh.

Unable to come up with another option, Victoria stepped through the open door of the car. This was her first time being in a subway car fitted with leather seats or one lined with mahogany and brass.

“Not exactly what you’d find on the blue line,” Victoria remarked. “So what now?”

As her question rang out into the train, the door closed behind her, and the car lunged forward. Victoria reached for one of the seats and sat down. It should not have been a surprise that this contraption was also automated.

Out back, a series of lights appeared, a fresh car activated to replace this one. Victoria watched in awe, barely able to imagine the expenses associated with running such a system. As the train moved on, the somniferous clickety-clack of the tracks embraced her mind. Soon, Victoria was sound asleep. Meanwhile, back at the station, a slick trail of blood led directly to the platform’s edge.