I have completed my second review of The Grand Project, a story which features a hotel that caters to the needs of things that go bump in the night.  At the end of my first review, I ended up with 4039 modifications over the total of the work.  Additionally, there were 41 changes per percent based on the novels length.

This revision felt more brutal, since I did a lot of formatting work to separate out the dialogue from paragraphs.  Looking at my statistics from 28 Feb to 25 Apr 16, I ended up with the following:

This time around I have more definitive per chapter information, since I collected them after a chapter was completed.  Given that Chariots of Thunder was not part of the initial manuscript, it will not be counted until the next revision.

Another reason for the large amount of changes is related to my reviewing method.  When I review a chapter, I note changes then transcribe them into my manuscript.  I do not re-read the chapter before moving on since that material will be covered during the next review.  Sometimes my changes were improperly transcribed or retained some of the older verses.  Its not perfect, but I prefer to keep momentum. 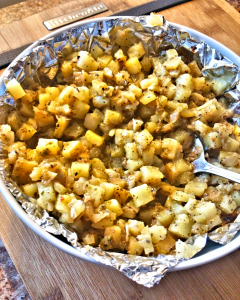 This dish has been one of my go-to side dishes for years.  This recipe combines all of the elements of baked potatoes into one. The cooking process will melt the butter over the potatoes, onions and garlic to create this ready to eat dish.

END_OF_DOCUMENT_TOKEN_TO_BE_REPLACED

My child tried to pull a fast one on the Tooth Fairy!

Earlier this week my child woke up to discover she lost a tooth overnight.  This tooth had been bothering her for a couple of days, so one would think she was relieved.

However, that secondary when compared to a visit from the Tooth Fairy.  Since my child was supposed to switch parents after school, I placed the tooth in a plastic baggie so she could keep track of it.

My child then asked to switch nights so the Tooth Fairy could see her room here.   So when I picked her up after school, she was in good spirits and looking forward to her payout.

On the way home she spoke children who lost their teeth while showing them off and could not complete their transactions with the Tooth Fairy.  She described how heart striken they were and how lucky she was.

Since she successfully transitioned from one household to the next without incident before, I paid no need.  She went about her day and let her stay up a bit later so she could brush the tooth.  She seemed insistent that the Tooth Fairy get pristine and shiny booty that night!

Later in the evening, I pulled out the baggie from under her pillow then noticed the bag was different.  This caught my attention, latet my suspicions were confirmed when I switched out the contents.

Upon closer inspection, I discovered that it was a white rock.  Small enough and similar in shape to a tooth to pass muster at a glance.  So yes, my child tried to pull a fast one on the Tooth Fairy!

Curious, I left a note with the money.  The following was inscribed:

Payment of one rock accepted in lieu of tooth.  — Molar Mae

The message was purposefully cryptic she would ask me what the note written in cursive script said.  When I read out what the note, she shrugged her shoulders then acted convincingly confused.

Eventually she came clean on the switch.   Unfortunately for her, I now have a story that can be brought up at family gatherings and whatnot.  To think that my child is an incarnation of Moriarty!

Is blackmail at the tender age of seven lucrative? 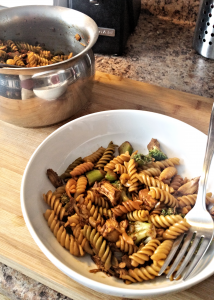 When the Chinese immigrated to North-America, they used the raw ingredients available to them.  Hence Chinese food that differs from what we would find in China today.

This French Canadian meal is such a variant. This recipe is easy to make and an excellent way to change things up when you have leftover rotisserie chicken or pork.  Simply prepare, mix and you are done!

END_OF_DOCUMENT_TOKEN_TO_BE_REPLACED

I have completed my second review of Ghoul Hunters. In this modern day chapter, a group of paranormal researchers discover the truth about the Grand.

There were 329 modifications made to this 15 page chapter. Overall, this revision concentrated on improving the chapter’s readability. Several modifications were related to formatting and maintaining consistency.

Both Google Docs and Wattpad have the revised edition. Note that the Google Docs version permits comments and revisions, feel free to make use of this capability.