Julia is a werewolf who turned against her pack and saved an innocent life. As a reward for her good deed, she ends up in prison, but thrives while others like her waste away.

She may look like the Little Red Riding Hood, but she really is the wolf.

On the eve of a full moon, an unknown benefactor arranges for Julia’s release. Faced with the prospect of returning to the city that nearly killed her, she opts to disappear into the surrounding woods.

This is the opportunity she needs to find herself and reconnect with the wild. As her past resurfaces, the supernatural and dark elements within humanity take notice of her.

Before reading on, be sure to consider: She may look like the Little Red Riding Hood, but she really is the wolf.

Dark Hearts is available in Paperback, Hardcover, and Audiobook.

The blurb for What Lies Within, from indie author D.W. Harvey, mentions a dark hidden secret, an evil spirit’s curse, and a sole survivor… all of which perfectly set the stage for this story.

This story is written from the point of view of the sole survivor as she nears the end of her journey. We are quickly brought up to speed on the character’s motivations, her need to be there, and what she intends to do.

However, there is plenty of room for discovery, and readers may well be left guessing to the very end. It offers a satisfying ending and leaves you yearning for more, the latter of which is this reader’s only complaint. Sadly, this was little more than a glimpse into a world filled with wonder.

It is my pleasure to introduce The Van Helsing Incursion, the third installment of the Clara Grey Adventures, a Dark Fantasy series about a hunter who hunts things that go bump in the night! This is my fourth release in as many years, and while part of a series, I consider this book to stand on its own.

After a lifetime of hunting creatures that haunt our dreams, a flapper, turned fallen angel, gives a budding relationship the chance to grow. Should be a snap? Think again!

During the Roaring Twenties, Clara Grey hunted things that went bump in the night. On her final mission, she paid the ultimate price to rid the world of a powerful foe. As a reward, she ascended to Heaven and joined its ranks as an angel.

Hunting things that go bump in the night is child’s play when compared to juggling relationships.

Ninety years after her death, Clara fell to Earth intent on saving a soul. While her mission was a success, an act of self-defence barred her from returning to Heaven. Lost in the modern world, Clara was forced to seek out unlikely allies to navigate through those uncertain times.

Four months later, Clara has settled in with Elizabeth, a young woman she saved shortly after descending to Earth. For a gal who had sworn off anything that hinted at normalcy, she learns that being average is not as easy as it seems.

Alas, repercussions from choices made on that fateful mission have not been idle. Her enemies trigger a chain of events that will force our fated femme fatale to act. Is Clara prepared to deal with the fallout? Will her allies come to her aid? Or must she stand on her own?

Before reading on, be sure to consider: Hunting things that go bump in the night is child’s play when compared to juggling relationships.

The Van Helsing Incursion is also available in print on Amazon.com.

You know a book is that good when you rush out to buy the paperback! Just got Matriarch by indie author Adam Wing in the mail today. This story was truly unlike anything I have ever read! So what are you waiting for? 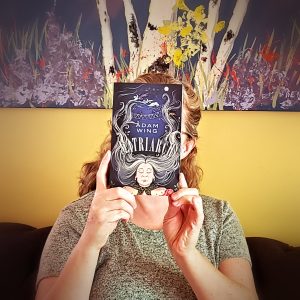 I picked up the most amazing book this week! Matriarch, by Adam Wing, is a Indie fantasy with a mythological element that I really could not put down. Coming in at just over one-hundred pages, I devoured this novella in two sittings.

What I thought would be a sweet love story told by the family matriarch on her deathbed, actually became a twisted series of tall tales aimed to entertain her descendants…or was it?

The reader is treated to a story of love and dedication with increasingly unlikely developments. While fantasy and reality are expertly interwoven, the ending still comes as a delicious shock!

This story was truly unlike anything I have ever read! I highly recommend it.