Anna is a humanoid mermaid who spends her days with the local timekeeper until a podmate comes to her with a proposal. They hatch a plan to head out into the watery ruins of humanity in search of lost technology and materials. For a young mermaid living in the dredges of society, the promise of riches from such a find is just too big to pass up.

When humanity has been driven into the sea, what lurks above the waves?

Armed with nothing more than an old map and some rusty road signs to follow, they are soon reminded that adventure often brings forth more than its fair share of rough waters. Her friend gets captured, leaving Anna alone in a world where mermaids are nowhere near the top of the food chain.

Follow Anna as she makes landfall and learns why her ancestors abandoned the surface. Lost in a world that is perpetually covered in a thick fog, Anna must navigate through what remains above the high-water mark. What will she find? An ally? A foe? Or will she find nothing more than death and destruction?

Before reading on, be sure to consider: When humanity has been driven into the sea, what lurks above the waves?

High Water Mark is also available in Paperback and Hardcover.

It’s when they creep out of the shadows that you should beware. The good ones will hold your hand when you’re having a nightmare; the bad ones BECOME your nightmare, seeping into your very soul and burrowing in the darkness until they’ve completely taken over.

Once you plunge into these pages, you won’t want to leave.

REBIRTH by A. Denner
Immortality always comes with a sacrifice. But how can Nova finish the deed when her Prey is the only one that can save her?

GABBY’S FUTURE by Mikki Noble
A future-telling tree offers Gabby an unpromising future she must try to change. Will that change make things better or worse?

LIFE AND DEATH by Nita Pan
Brimming with love and betrayal, the courtship between two gods explores what it means to have humanity. Is the divine romance between Life and Death doomed from the very beginning?

CHOSEN by Jennifer C. Colvin
Stolen away to the Philippine Underworld by a mysterious goddess, dutiful and meek Bituin, a young girl from a small hidden mountain town on Cebu Island, discovers the gods have chosen her as a Babaylan (shaman). Newly imbued with powers beyond her wildest imagination, Bituin’s spiritual awakening sends her life into upheaval and rocks the foundation of her quiet town.

BROKEN PROMISES by Evelyn Chartres
A young woman finds herself isolated from all she knows when her home is set ablaze. Despite insurmountable odds, she must risk traversing unfamiliar and hostile territory to find help, or declare her life forfeit.

CAN YOU KEEP A SECRET? by Carmen Adams
Palkar Village is a bloodthirsty place for those of the supernatural, and after years of senseless persecution the Sorcerer community sought refuge elsewhere. For decades the Earth Sorceress Alina lived peacefully among her kind in a deep forest until one night of magic changed her world. The Sorcerer community lived in secret tranquility for decades…but would things stay that way?

SULFUR NIGHT by Abby Paul
Cursed. Tainted. Marked. The children born on the sulfur night aren’t like the rest of us. They can serve only one purpose. Perhaps the new gods are as blood thirsty as the old.

THE LOCKSMITH by Ari Meghlen
For Cara, a non-magical human, in a world of magic, picking locks is how she makes a living. Her quiet life is threatened when a mysterious traveler brings her a complex lock that makes her the target of a powerful enemy.

ORDINARY FAE by Melony Paradise
The only way to hide from a Fae king is to live among humans – as a human. Can Izbella Rane have the normal life she wants, or will she be forced into a world her family fled from?

After a lot of spit, polish, and effort, the stars have aligned. So that means I can now announce the release of my latest dark fantasy novel in both print and eBook! The Van Helsing Resurgence is the second book of the Clara Grey Adventures, and features the femme fatale readers fell in love in The Van Helsing Paradox.

This story brings forth a rich set of characters, as they navigate in a world where reality has been shattered. Alone in this modern world, Clara soon learns that while the Roaring Twenties are long gone, a heroine’s work is never done.

So what are you waiting for? 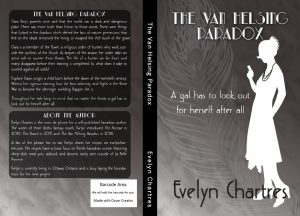 I just got notice from CreateSpace, that my proof of the Van Helsing Paradox is ready! So I’ve ordered a couple of proofs and my book should be available as a trade paperback within the next couple of weeks!

While it’s nice to be able to cuddle up to my Kindle Paperwhite. I know people like nothing more than the smell and feeling of inked paper between their fingers… Actually, that sounds like a great reason to catch up on my reading!

For now, you can get find my eBook on most platforms for free! Please visit the Van Helsing Paradox‘s page or its Universal Book Link to find a retailer.

A gal has to look out for herself after all. 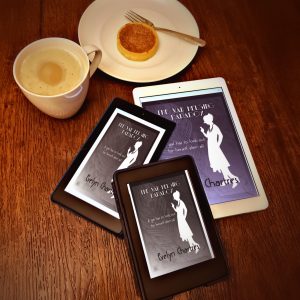 Coffee and a treat? Is there a better way to celebrate the release of my latest book? The Van Helsing Paradox has finally wound its way through various channels and is now available on multiple platforms for free!

Explore a hunter’s origins, as a child born before the dawn of the twentieth century. Witness her rigorous training, how she faces adversity, and fights in the Great War to become the derringer wielding flapper she is.

Throughout her tale, keep in mind that no matter the threat, a gal has to look out for herself after all.